Our Peerpoint Life stories showcase the ways in which our consultants spend their time outside of work.

Before joining Peerpoint, Amrik worked as an in-house lawyer at a leading global investment bank in its London office. He rose through the ranks and had the opportunity to move to its Sydney office, where he was promoted to executive director and qualified as a solicitor in Australia. In 2016, he decided to leave the bank and pursue his passion, acting, and take up a one-year screen acting course.

After finishing the course in 2017, he wanted to continue acting in a meaningful way, so that it was more than just a hobby, but also keep his legal qualifications and skillset as a lawyer alive. It was this that prompted Amrik to join the Peerpoint panel as our model provided him with a viable way to take periods of time off between assignments to focus on his acting, allowing him to pursue both careers simultaneously.

“Peerpoint has been extremely respectful of what I’m trying to achieve outside the legal space. As an employee, it can be difficult to create the flexibility to be able to do that but as a consultant it is easier to have the conversations that enable you to build that into your work patterns. By working with Peerpoint, I have been able to find the flexibility that I needed to continue to act."

Proving that it is possible to develop a career at the same time as a passion, Amrik has featured in several TV series and short films in Australia such as ‘The Unlisted’, ‘A Parting Gift’, and ‘Cleverman’. He has also performed on a number of stages across Sydney, including acting in the world premiere of the play ‘Jatinga’.

“With Peerpoint’s support and backing, I felt secure enough to take the opportunity in the UK. The truly international reach of Peerpoint has allowed me to easily transition to working with the team in London and integrate with the community.”

To learn more about how you can balance your passions with a rewarding legal career by consulting with Peerpoint, visit the Join our panel page. 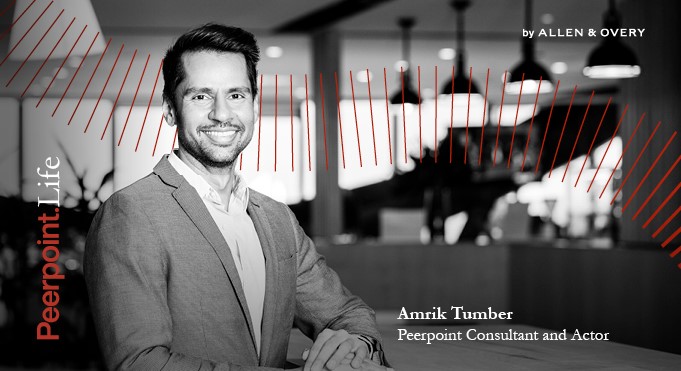 Please enter your contact details below if you would like to receive updates, articles and reports, and information about working with Peerpoint.

You may unsubscribe from receiving marketing communications at any time by emailing info@peerpoint.com or by clicking on the unsubscribe button in our marketing emails. You can find out more about how we use your personal information by reading our privacy policy.